A Conversation with Tom Hanks
*This special event will not be recorded and will only be available for viewing during the live session. 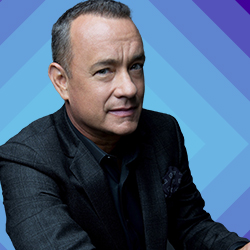 Tom Hanks is an award-winning actor, producer, and director. One of only two actors in history to win back-to-back Academy Awards for “Best Actor in a Leading Role,” he won his first Oscar in 1994 for his moving portrayal of AIDS-stricken lawyer Andrew Beckett in Jonathan Demme’s “Philadelphia.” The following year, he took home his second Oscar for his unforgettable performance in the title role of Robert Zemeckis’ “Forrest Gump.” He also won Golden Globe Awards for both films, as well as a SAG Award for the latter.

Hanks has also been honored with Academy Award nominations for his performances in Penny Marshall’s “Big,” Steven Spielberg’s “Saving Private Ryan,” Robert Zemeckis’ “Cast Away,” and, most recently, for his portrayal of Fred Rogers in Marielle Heller’s “A Beautiful Day in the Neighborhood.” He also won Golden Globes for “Big” and “Cast Away.”

In 2013, Hanks starred in the Academy Award-nominated film “Captain Phillips” (for which he received Golden Globe, SAG, and BAFTA nominations), as well as the AFI Movie of the Year “Saving Mr. Banks.” Four years later, he received his ninth Golden Globe nomination, as well as “Best Actor” from the National Board of Review, for his work in Steven Spielberg’s Academy Award-nominated film “The Post,” alongside Meryl Streep.

Most recently, Hanks wrote and starred in the WWII drama “Greyhound” for Apple TV+. He will next be seen in Paul Greengrass’ pre-Civil War drama “News of the World,” and “BIOS” for Universal Pictures.

His other acting credits include the Tom Tykwer, Andy Wachowski, and Lana Wachoski film “Cloud Atlas”; Stephen Daldry’s “Extremely Loud & Incredibly Close”; the animated adventure “The Polar Express” (which he also executive produced and which reunited him with director Robert Zemeckis); the Coen brothers’ “The Ladykillers”; Steven Spielberg’s “The Terminal” and “Catch Me If You Can”; Sam Mendes’ “Road to Perdition”; Frank Darabont’s “The Green Mile”; Nora Ephron’s “You’ve Got Mail” and “Sleepless in Seattle”; Penny Marshall’s “A League of Their Own”; Ron Howard’s “Apollo 13,” “The Da Vinci Code,” “Angels & Demons,” “Splash,” “Hologram for a King” “Inferno,” “Sully”; and the computer-animated blockbusters “Cars,” “Toy Story,” “Toy Story 2,” “Toy Story 3,” and “Toy Story 4.”

In 1996, Hanks made his successful feature film writing and directing debut with “That Thing You Do,” in which he also starred. He later wrote, produced, directed, and starred in “Larry Crowne” with Julia Roberts. Under his Playtone banner, founded in 1998 with producing partner Gary Goetzman, Hanks’ additional film producing credits include the smash-hit romantic comedy “My Big Fat Greek Wedding” with Hanks’ wife Rita Wilson, “Where the Wild Things Are,” “The Polar Express,” “The Ant Bully,” “Charlie Wilson’s War,” “Mamma Mia!,” “Mamma Mia! Here We Go Again,” “The Great Buck Howard,” and “Starter for 10.”

Hanks’ work on the big screen has translated to success on the small screen as well. Following “Apollo 13,” he executive produced and hosted the acclaimed HBO miniseries “From the Earth to the Moon,” also directing one segment and writing several others. His work on the miniseries brought him Emmy, Golden Globe and Producers Guild Awards, as well as an Emmy nomination for “Outstanding Directing for a Miniseries.”

In 2001 he then went on to executive produce his second miniseries for HBO, and first television series under his Playtone banner, “Band of Brothers,” alongside Steven Spielberg. The WWII drama, based on the book Stephen Ambrose, won Emmy and Golden Globe Awards for “Outstanding Miniseries.” Hanks directed one episode of the series and wrote another, earning him an Emmy Award for “Outstanding Directing for a Miniseries” and an Emmy nomination for “Outstanding Writing for a Miniseries.” He also received another Producers Guild Award for his work on the project. In 2010, he and Spielberg re-teamed for the award-winning HBO miniseries “The Pacific,” for which Hanks once again served as executive producer. The 10-part program won eight Emmy Awards, including “Outstanding Miniseries,” and brought Hanks his fourth PGA Award.

At the 77th Annual Golden Globe Awards, Hanks was honored with the prestigious Cecil B. DeMille Award by the Hollywood Foreign Press Association. Hanks has also received the American Film Institute’s Lifetime Achievement Award in 2002, the Film Society of Lincoln Center’s Chaplin Award in 2009, and, in 2014, Hanks received a Kennedy Center Honor.
*This special event will not be recorded and will only be available for viewing during the live session.

Presented by ASHP CEO Paul W. Abramowitz, Pharm.D., Sc.D. (Hon.), FASHP
The CEO Award for Staff Excellence recognizes an individual staff member who, in addition to performing all of his/her normal job duties with excellence, has also demonstrated exceptional initiative in contributing to ASHP. Specifically, this award recognizes a staff member who has provided an outstanding contribution by leading or developing a project of significant value for ASHP and has demonstrated sustained excellence over time to the advancement of ASHP.

ASHP Board of Directors’ Awards

The ASHP Board of Directors Award of Honor recognizes individuals outside the pharmacy discipline who have made extraordinary national or worldwide contributions to the health field. The 2020 Award of Honor is being presented to Victor J. Dzau, M.D., President, National Academy of Medicine (NAM). Dr. Dzau is an internationally acclaimed leader and scientist whose work has improved health and healthcare in the United States and globally. He is a strong advocate for the engagement of pharmacists on the interprofessional healthcare team as well their participation in critical public health initiatives such as the NAM Action Collaborative on Clinician Well-Being and Resilience and the NAM Action Collaborative on Countering the U.S. Opioid Epidemic.

The ASHP Board of Directors’ Distinguished Leadership Award recognizes contributions to excellence in pharmacy practice leadership in acute and ambulatory care settings. The 2020 Distinguished Leadership Award is being presented to John A. Armitstead, M.S., R.Ph., FASHP, System Director, Pharmacy Services, Lee Health. Mr. Armitstead is an engaging and respected pharmacy administrator and leader. His contributions to ASHP and the profession have elevated pharmacy practice in countless ways, including his support for continuous professional development for the pharmacy workforce.

The ASHP Board of Directors’ Donald E. Francke Medal honors pharmacists who have made significant international contributions to advance pharmacy practice. The 2020 Donald E. Francke Medal is being presented to Anthony Serracino-Inglott, Pharm.D., Professor, Department of Pharmacy, Faculty of Medicine and Surgery, University of Malta. Professor Serracino-Inglott is a well-known and respected figure in international pharmacy. He is a champion of clinical pharmacy practice focused on patient care and safety and was instrumental in transforming pharmacy practice in his home country of Malta and across Europe and other countries.

The ASHP-Association of Black Health-System Pharmacists Joint Leadership Award recognizes individuals who have demonstrated exceptional leadership in efforts to reduce racial and ethnic disparities in healthcare. The 2020 Joint Leadership Award is being presented to Kathleen B. Kennedy, Pharm.D., Dean, Professor, and Founding Director of the Center for Minority Health and Health Disparities Research and Education, Xavier University of Louisiana College of Pharmacy. Dr. Kennedy is a national champion of health equity and passionate advocate for the reduction of racial and ethnic disparities in healthcare. A respected leader, educator, and researcher, she has leveraged her expertise in the areas of cultural competence and community engagement throughout her career to create a more just and inclusive healthcare system that improves, advances, and transforms healthcare for all patients and ensures all members of our communities receive optimal care.

ASHP Foundation 2020 Award for Sustained Contributions to the Literature

The ASHP Foundation Literature Awards recognizes published articles in biomedical literature by pharmacists. The awards are given in multiple categories, including the Award for Sustained Contributions to the Literature, which recognizes a pharmacists with a 20-year record of publishing high quality and impactful peer-reviewed biomedical literature. The 2020 Award for Sustained Contributions is being presented to Michael D. Reed, Pharm.D., FCCP, FCP, Professor Emeritus of Pediatrics, Case Western Reserve University, School of Medicine in Cleveland, OH. Dr. Reed has extensive research experience and has authored more than 250 published works describing his original research activities, invited reviews and book chapters.